The Army Corps of Engineers was supposed to thoroughly review Pebble’s mining plans for Bristol Bay – and the agency just failed.

The planned Pebble Mine in Bristol Bay, Alaska is moving rapidly down the permitting track and last week the Army Corps of Engineers released a draft environmental impact statement. Wild Salmon Center and our Alaskan partners had hoped that the federal agency would give this mine project the heavy scrutiny it deserves, given that it is planned for the most important salmon stronghold left on Earth. The evidence is mounting that the Army Corps has done just the opposite. 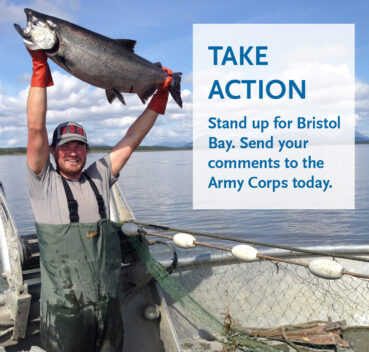 Both scientists and former agency officials are now concluding that this review is an abject failure: it does not hold the Canadian mining company behind Pebble accountable on basic questions about how and where they plan to mine, and — mostly importantly — how they plan to protect the people, the clean water, the fishery, and the jobs of Bristol Bay.

Join Alaskans, fishermen and salmon advocates everywhere in standing up to this breach of government responsibility. Send a comment today to the Army Corps calling for this permitting process to be halted. Pebble needs to go back to the drawing board.

There are three major ways that the review for the Pebble Mine fails to hold the mining company accountable to the most basic standards:

Unmitigated risks to water, salmon, and a $1.5 billion fishery. In 2014, under a previous administration, the U.S. Environmental Protection Agency found that Pebble’s plan to wipe out 21 miles of salmon streams and 3,000 acres of wetlands, posed an “unacceptable risk” to Bristol Bay’s commercial, sport and subsistence fisheries. The latest plan is worse: it would affect 60 more miles of streams than the EPA evaluated. And Pebble is now planning to process 10.6 billion gallons of polluted wastewater every year and dump it into the Bristol Bay watershed. The Army Corps has demanded no explanation of how Pebble will accomplish or pay for this historic feat, in spite of the fact that it has never been done before at this scale.

No planning for major toxic waste catastrophe. The facilities that are used to store mine waste at open pit copper mines have a long history of failing – causing mine waste to leak and contaminate waterways. This long list of earthen dam failures grows each year, and notably includes the recent Vale dam collapse in Brazil and the Mount Polley Mine collapse that spilled billions of gallons of toxic mine waste into salmon streams in British Columbia. Pebble is proposing to store up to a billion tons of toxic tailings behind an earthen dam in Bristol Bay’s headwaters.  And they will use the same dam designer as Mount Polley. Yet the Army Corps is not requiring Pebble to address a major failure scenario at all.

Pebble has no realistic economic plan — and the Corps doesn’t care. The Army Corps has highlighted more than 60 instances where Pebble failed to provide adequate information, starting with an economic analysis of how the mine will pencil out. When mines fail economically, foreign companies typically declare bankruptcy and walk away. And American taxpayers will be on the hook to clean up the mess. But the Army Corps isn’t pressing Pebble on economics; instead it’s giving Pebble a free pass.

The job of the Army Corps of Engineers it to make sure that the projects they approve are well-planned and safe. By holding projects to high standards, the agency helps to protect local communities and businesses from the risks associated with development projects. In the case of the Pebble Mine, they have abandoned those responsibilities and failed at that job.

Bristol Bay isn’t a place to run first-time experiments. It’s time to stop this shoddy review in one of the most important landscapes in America.

SEND YOUR COMMENTS TO THE ARMY CORPS TODAY.