Cross-border collaboration for taimen — ‘river tigers’ of the East.

A group of ancient species that occupy a unique ecological niche, taimen are the largest salmonids in the world. Taimen can live over 30 years and reach 6 feet in length and over 100 pounds in weight. Due to their voracious appetite and their place at the top of the food chain (some feed on ducklings and adult Pacific salmon), taimen are sometimes called “river wolves” or “river tigers”. Because taimen reach maturity later and live longer than other salmonids, they are also more sensitive to changes in their environment and serve as an important indicator of the health of the great rivers of Asia and Europe. 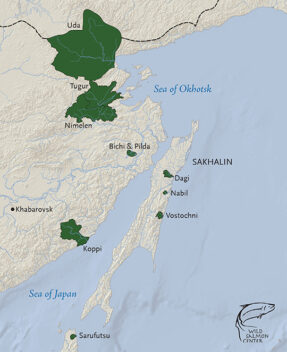 Taimen face habitat loss and unsustainable fishing pressure on their native rivers, which span across the Japanese Island of Hokkaido, Russia’s Sakhalin and Kuril Islands and far eastern mainland Russia (see inset map), Mongolia, China, and the Korean peninsula. The International Union for Conservation of Nature (IUCN) consider taimen species status to range from vulnerable to critically endangered. However, because they are not a commercially harvested species, taimen have been poorly studied until recently.

To further understand and conserve taimen, Wild Salmon Center is building an international taimen initiative, which will bring together scientists, resource managers, outfitters, and conservation groups around the Pacific Rim. As part of this initiative WSC is working on research with the IUCN Salmonid Specialist Group and partners in Japan, and the Russian Far East and Mongolia. These research efforts are focused on three separate areas:

Through community involvement, education and science-based strategies to identify and protect taimen strongholds, we have an important opportunity to protect these critically endangered, flagship species, and to make a lasting contribution to the health of Asia’s remarkable wild salmon ecosystems.

This research aims to understand how taimen spawn, feed, and grow in rivers—both with, and without, the marine nutrients provided by salmon.

In Khabarovsk, Russia, we’ve conducted field studies to better understand the feeding patterns of Siberian taimen (Hucho taimen), which are the only populations that eat returning adult Pacific salmon.  We have also worked closely with our Russian partners to establish protected areas for this species in Khabarovsk, in the lower Amur River region. (Below: WSC’s Guido Rahr travels to the Tugur River deep into the Russian Far East, to the land of taimen.)

WSC helped carry out ten years worth of research to conserve the sea-going Sakhalin taimen (Parahucho perryi), including a two year study on Japan’s Sarufutsu River. An important component of the research efforts was highlighted in a scientific paper describing Sakhalin taimen extinction risk. The authors identified the crucial role that river floodplains play in conserving this species, especially large lagoons.

The Koppi River in Khabarovsk is a Sakhalin taimen stronghold. With our partners at Khabarovsk Wildlife Foundation, we have worked on base levels of protection from headwaters to sea on the most biodiverse salmon ecosystem in the world—featuring Amur tigers, Blakiston’s fish owls, Steller’s sea eagles, and Russia’s strongest remaining runs of Sakhalin taimen and Asian masu salmon (also known as cherry salmon).

In the coming years, WSC will help to gather international researchers for scientific meetings focused on taimen. We will also bring together outfitters and scientists to expand our network of data collection and educate guides and outfitters on best practices for taimen catch-and-release fishing.