A global alliance of conservation and community groups is using a dramatic art installation of glass salmon to inspire delegates to restore ecosystems as part of climate action.

This has been one of the toughest years yet for wild salmon and steelhead. Drought and heat waves arrived on top of years of shifting ocean conditions and decades of mounting impacts from overfishing, habitat loss, and dams. Up and down North America’s West Coast, we saw poor returns and fisheries closures. Fisheries in Asia and the Russian Far East haven’t fared much better.

If this is the new normal, it’s downright frightening.

It also feels like the right moment to take the debate about the future of wild salmon to a world stage. 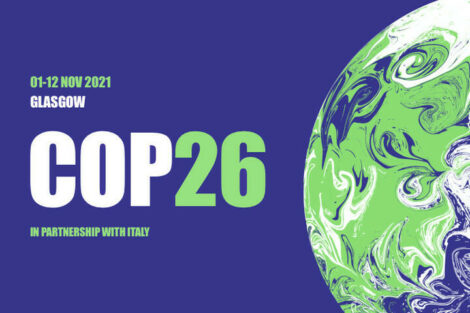 Starting October 31, Wild Salmon Center is joining with artists, community organizations and salmon NGOs from around the world to inspire and activate the global leaders at the United Nations COP 26 climate conference in Glasgow, Scotland. The catalyst is “Salmon School,” a massive form of 350 hand-blown glass salmon which will swim above climate delegates’ heads in the dining area in the conference hub.

Our shared hope is that Salmon School will help push policymakers to see salmon, climate change and a livable future as inseparable issues. With a mirrored interior, these glass forms reflect the viewer and ask them to contemplate the dire threat that salmon and other wildlife populations face in a changing environment. (As well as contemplating our impact on the planet).  Viewing Salmon School, we also consider what action we must all take to save this and other species.

Our ask is simple: let’s focus climate action on rebuilding resilient natural systems. By zeroing in on critical keystone species like salmon and restoring their ecosystems, the world can make real progress in the struggle to adapt and mitigate climate change while delivering things we all need to survive: cold, clean water, clean air, forests, wetlands, food, and healthy ecosystems across a vast section of the planet, to name a few necessities.

Reflective salmon forms ask each of us to play a role in the restoration of the planet.

Many of us have dismal expectations of the biannual, underachieving sufferfest that the U.N.’s annual climate conference has become. For the press, pessimism is the hot buzzword in pre-event coverage. It’s valid to ask if COP 26, even with its attending heads of state and high-level delegations, is worth the effort.

We are sharing Salmon School—and the very real threats and possibilities it embodies— as a tangible vision. The installation should serve as a jolt of energy inside the ethereal world of climate negotiations: a world of emissions targets and spreadsheets and vague assurances about future generations.

Salmon School presents a pragmatic, feasible pathway to tackling the twin crises of climate change and biodiversity loss. The sculpture and its associated storytelling highlight the actual, ongoing work of real rivers and people, from the recently restored Clyde River running outside COP 26’s Glasgow headquarters to the Skagit River in Western Washington, where steelhead declines led artist Joseph Rossano to create Salmon School’s first glass fish. Salmon School connects ecosystems and communities worldwide—and elevates to a global level the very real impacts we’re all feeling on our home waters. It motivates us to plot local — in addition to global — paths out of the climate crisis.

We already know this idea works. It’s Wild Salmon Center’s philosophy across the North Pacific: that local actions are some of the best methods to build climate resilience. When we accelerate actions like removing the Lower Snake River dams—or forestry reforms in Oregon to protect fish from streamside logging or restoring Washington Coast wetlands—we protect cold, clean water and help both communities and wild fish runs adapt to climate change. Other local actions, including protecting the diversity of salmon and steelhead runs on our home rivers, follow from there. These decisions, usually made at the local level, are the things we can influence directly.

Local actions are one of the best paths to climate resilience. We already know this idea works. It’s Wild Salmon Center’s philosophy across the North Pacific.

A 2021 Wild Salmon Center/Ecotrust analysis (mapped below) found high carbon storage in salmon strongholds across the North Pacific. When we looked closely at the greenhouse gases captured by trees and soils across in just the 18 salmon stronghold watersheds where Wild Salmon Center works, we found that these areas collectively hold the carbon equivalent of about three-and-a-half years of gross U.S. carbon emissions at 2019 rates.

Conserving these large landscapes will be key for the U.S., Canada, and Russia as the world races to get to a net-zero carbon budget by mid-century.

That’s because 350 glass salmon in Glasgow don’t just make for an arresting piece of art. They’re a call to action: for world leaders to urgently join and accelerate a movement that’s already underway to protect and restore our world’s natural systems for all that depend on them.