Along Oregon’s Elk River, a fourth-generation ranching family’s long-term focus on conservation is yielding cascading benefits for salmon, sheep, and the soil beneath their feet.

In late August, Terry Wahl stood wide-legged on a narrow dirt road, gazing down at the deeply incised creek running alongside.

Specifically, he contemplated the mouth of the large culvert beneath his feet, installed to direct overflow from Cedar Creek into an idyllic reed-filled pond—what the Wahls call their “fish hotel”—on the other side of the road. And in the culvert? A beaver, Wahl thought; one that’s been causing trouble here at his sheep ranch.

“The little a-hole’s probably in there right now,” he grinned. Turning, Wahl pointed to another culvert within spitting distance, this one bottlenecking Cedar Creek under a road crossing. Unlike the generous pond culvert underfoot, this metal tube was small, rusty, and nearly choked with rocky infill and rafts of woody debris. Someone was building a dam—again.

“Beavers want to make pools behind pinch points, and that culvert just helps him out,” explained Wahl. “We have to dig it out every couple days or the creek backs up and floods the road.”

By mid-September, heavy machinery had scooped out that failing culvert, along with the road bed around it. The work marked just the latest in a series of restoration projects for which the Wahls have teamed up with the Curry Watershed Partnership, one of the many public and private organizations that form the Wild Salmon Center-managed Coast Coho Partnership. 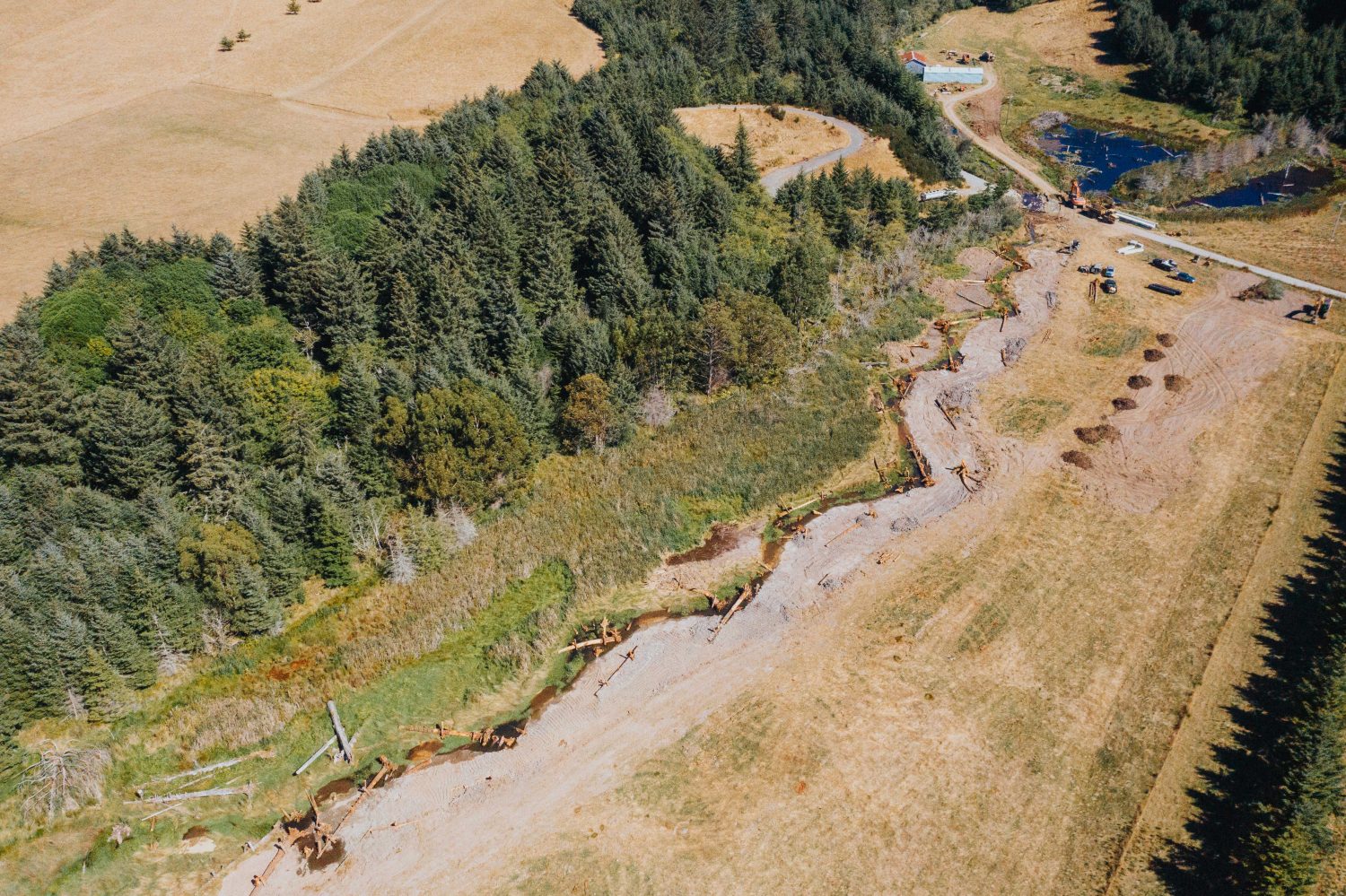 A bird’s-eye view of Cedar Creek just before culvert removal. Downstream of the road crossing at upper right (with culvert underneath) is a 4,200-foot stretch of newly remeandered creek flowing toward the Elk River. With a bridge replacing the culvert, now-accessible habitat upstream will also be restored for fish—with existing beaver dams tolerated by the Wahls. “What it comes to is, get the water moving, and beavers can stay,” says Terry Wahl. (PC: Brian Kelley @brianfilm)

Now, Cedar Creek flows freely underneath a new bridge, meandering past sheep pastures to meet the Elk River a stone’s throw from the ocean. The hope is threefold: to remove a barrier for migrating Oregon Coast coho and other fish; to widen the creek to better connect with off-channel wildlife habitat, like the fish hotel, that also reduces flooding; and, hopefully, to save Wahl the drudgery of digging out the culvert. And the little a-hole? Not to worry; he and his furry friends have other grand lodges just north of the Wahl’s new bridge, structures that don’t block the creek but do create pools perfect for young coho.

“You’ve got to work your problems out,” says Wahl, a fourth generation rancher on this 852-acre property north of Port Orford. “Beavers are going to build there, but you don’t have to kill them. The way I look at it is, it’s better to have both, rather than an either/or. We have our livestock, but the wildlife gets equal billing. I can’t think of a person out there who doesn’t enjoy seeing some wildlife.”

That working balance doesn’t come easily; it takes planning, big-picture thinking, and hard work to create spaces that successfully marry agriculture and conservation. Cedar Creek’s ongoing makeover—projects that aim to rewild 51 riparian acres on the ranch and dramatically improve the creek’s fish-friendliness (and flood resiliency) both above and below the new bridge—is part of a regenerative land management approach that Wahl and his siblings have been tinkering with since the 1970s.

“You have to be hitting on all cylinders to make this work, but there are cascading benefits,” Wahl says.

The Wahl family’s early partnerships with the local watershed council led to grant-supported projects that fenced the ranch’s sheep pastures and built wildlife ponds like the one near the new bridge. Because the fences wall off delicate riparian areas to protect streams and soil integrity, the family’s sheep can’t roam freely through the property, in the style of more traditional ranching. Instead, the Wahls now cycle livestock through a series of fields, where ewes munch through fresh grass “like a giant lawnmower.”

“You have to be hitting on all cylinders to make this work, but there are cascading benefits,” Wahl says. “Each day we move our sheep, they roam, leave nutrients, and we move them along. That grows favorable forage and maintains the soils, sequestering carbon. You’re not incurring extra costs, and you’re not polluting.”

Wahl has seen this hard work pay off, literally; he reports that sheep production at the ranch has increased four-fold since he and his siblings first took over in the 1960s—even with 25 percent of the ranch now fenced off.

“The real problem we have with conservation and agriculture is it’s always been a fight,” says Wahl. “A lot of ranchers stay with what they’ve done traditionally, and change can feel like criticism. We’ve had a lot of failures; we used to build a lot of ditches, back in the day. But things do change. Others see what you’ve done, and that the economics are there.”

Wahl is quick to note that none of this work would have been possible without outside help: grant support from government agencies and public-private partnerships like the Coast Coho Partnership, which gets major funding from NOAA Restoration Center and the Oregon Watershed Enhancement Board.

The family also counts on serious logistical support from Matt Swanson, the Curry Watershed Partnership’s Restoration Project Manager. In Swanson, the Wahls have found a long-term partner who understands the problems that ranchers and farmers encounter—and how restoration-focused solutions can be good both for business and fish.

“This is an important story to tell,” says Swanson. “Agriculture and conservation can be complementary. And agriculture isn’t static. It’s evolving. There are definitely people taking cues from what the Wahls are doing.”

For Swanson, a big part of building good working relationships with conservation-inclined property owners is not just flagging successes, but also owning up when things go wrong. The fish hotel, for example, led to some unintended pasture loss 15 years ago, when it was first installed.

“We work with a lot of producers down here,” says Swanson. “If what we truly want are those long-term effects for wildlife and aquatic species, it’s important to show that we own this evolution—that we take responsibility and aren’t walking away. I have a long-term relationship with this land and landowners, and so do many of the watershed councils.”

That deep land ethic is key for Wahl and his family, who are working on a conservation easement for the property, to ensure that it will be co-managed for agriculture and conservation in perpetuity: insurance to keep this land whole and healthy for future generations of many species.

“We have to keep on with these projects—that’s where you learn the do’s and don’ts,” says Wahl. “I told Matt I see a couple more places where things could happen. And he smiles and says, ‘if you come up with more projects, we can maybe deal that in. I’ll be here for a decade or more.’ If you can do things long-term, I think ranching and conservation live very well together.”

“This is an important story to tell,” says Swanson. “Agriculture and conservation can be complementary. And agriculture isn’t static. It’s evolving.”